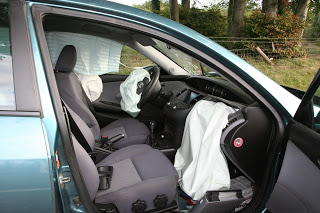 The recall only affects models from 2008 and earlier, here are the details:

The Reason for the Recall

The problem with the affected airbags is a dangerous propellant. There is a high likelihood of an airbag exploding when it is deployed in an accident. An exploding airbag will often result in metal parts being sprayed into the cabin of the vehicle. The metal parts are from the casing and can potentially lead to an injury to the driver or passenger. Humidity was identified as an issue because moisture might make the propellant more combustible.

A nationwide recall is being urged because there are vehicles experiencing this issue that are outside of high humidity areas. States which are affected include Hawaii, Florida, California, North Carolina, Puerto Rico, and the Virgin Islands.

Automakers are currently evaluating the request by the NHTSA. The recall is only for the airbag that is on the driver’s side of the vehicle. It does not affect passenger-side airbags. This is because these airbags use a different design and no tests have indicated a problem exists.

However, some automakers have issued a limited recall of passenger-side airbags to high humidity areas. A few lawmakers have expressed criticism of this decision and insist more is needed as regional recalls from automakers are no longer sufficient. A simple reason might be that people can use their cars to travel out of their states to more humid areas. If you believe you or someone you know may have been injured by a defective air bag then it may be beneficial to speak to an experienced car accident attorney.